Here is the new video for Peace Song, my new single, recorded at my Blue Frog show. It was embedded in my SmoothJazz.com Jazz Blast, and in the first four days it had over a thousand views! Enjoy! PS Latest chart action below....

Things are heating up!

A little footage of me and my band performing before a studio audience at Blue Frog Studios in White Rock BC. The song Berlin is cowritten by Jeff Lorber and myself and is featured on my album Cool Down. I am playing the Akai EVI 2000 wind synthesizer, which was invented by Nyle Steiner and is no longer in production. I actually hadn't played it for maybe a year .....I just pulled it out of the case and did a little knob twirling, then hit the record button! The live band consists of: Diane Lines- piano & keys; Adam Rohrlick- guitar; David Marion- bass; Stephen Dick- drums. Video was shot by Scott White, and audio recorded by Tony Chamberlist. Hope you like it......
Hello Everyone,

There has been lots of excitement and interest since I won Album of the Year and Instrumentalist of the Year at the Canadian Smoothies. Things are poppin', and the new single 'Peace Song' is going for adds Monday June 6. It differs from the original version, as we added Paul Brown on guitar for some honey-dripping solo work! Check it out here.

Also, my interview and special on the entire "Told Ya So" album is airing again this weekend on

In case you wanted to check it out!

BTW, my rockin' new merchandise portal goes live June 6 as well, from the main site www.GabrielJazz.com and Facebook.
Thanks,

Hey Everybody!!Just thought I'd let on that my new single Peace Song is going for adds on June 6!
I enlisted the ultra suave Paul Brown to play some guitar on it and it came out real nice.... Get a preview by clicking here. And in the spirit of a little fun, below are some
Words to Live By......or Not .... 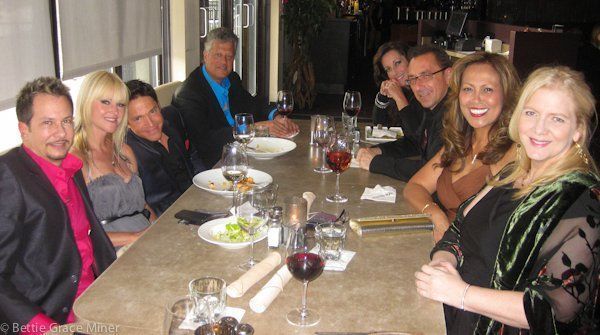 Just hangin' before the show!

(l-r) Gabriel, Mindi Abair, Dave Koz, Paul Brown, Jacqui Brown, Brian Simpson, Sylvia Ronahan (Hasselbach), Bettie Miner (awards designer)
Hey everybody, Here is an extra big tweet for you all.... I'm just leaving Toronto right now after playing a second post-awards
event, on my way back to Vancouver. I had a couple of amazing days
here, and am bringing home the gold! I am truly humbled and honored to be the 2011 recipient of both the
Instrumentalist of the Year AND Album of the Year at the Canadian
Smooth Jazz Awards! For those who don't follow, these awards and show
are the definitive voice of contemporary jazz in Canada, with the eyes
and input of the world on them, and is arguably the biggest jazz
awards production in North America. I had a cohesive and smoking feature spot playing Rockin' the
Ribjoint, my charting single, and want to thank my band mates Paul
Brown, Vernon Barbary, Andy Scott, Tony Grace, Don Breithaupt, and
Steve Heathcote for such a great groove! Other performers had features and received awards as well, and these
icons were breathtaking. I had the great fortune to play onstage
alongside the brightest stars out there: Larry Carlton, Dave Koz,
Mindi Abair, Brian Simpson, Steve Oliver, Warren Hill, Alexander
Zonjic, and more! Thanks again to all the industry folk, peers and fans for their
support, and by voting for me in these awards. Special kudos go out to Miles Black (who also received an award in
absentia) for his extensive contributions to my winning cd 'Told Ya
So', and to the wonderful players who contributed their own juju to
that project as well: Jeff Lorber, Marc Antoine, Darren Rahn, Paul
Brown, Rock Hendricks, and Amanda Wood. Hopefully these awards will give me more credibility and a leg up in
the industry, and connect me to the right support team to keep moving
forward. In the meantime, I'm just going to keep hittin' it! Don't forget my two upcoming shows in Vancouver May 6 and 8 ..... Go
to www.GabrielJazz.com for more details. In gratitude, Gabriel
Sent from my iPhone, sorry for duplicates or typos!
Download 3c--Gabriel_Hasselbach_-_Full_.mp3
Download 3b--Gabriel_Hasselbach_-_Full_.mp3

This site documents my journey as an independent jazz artist in a chaotic music industry. I guess this is where I get to 'blow my own' horn, so here goes.